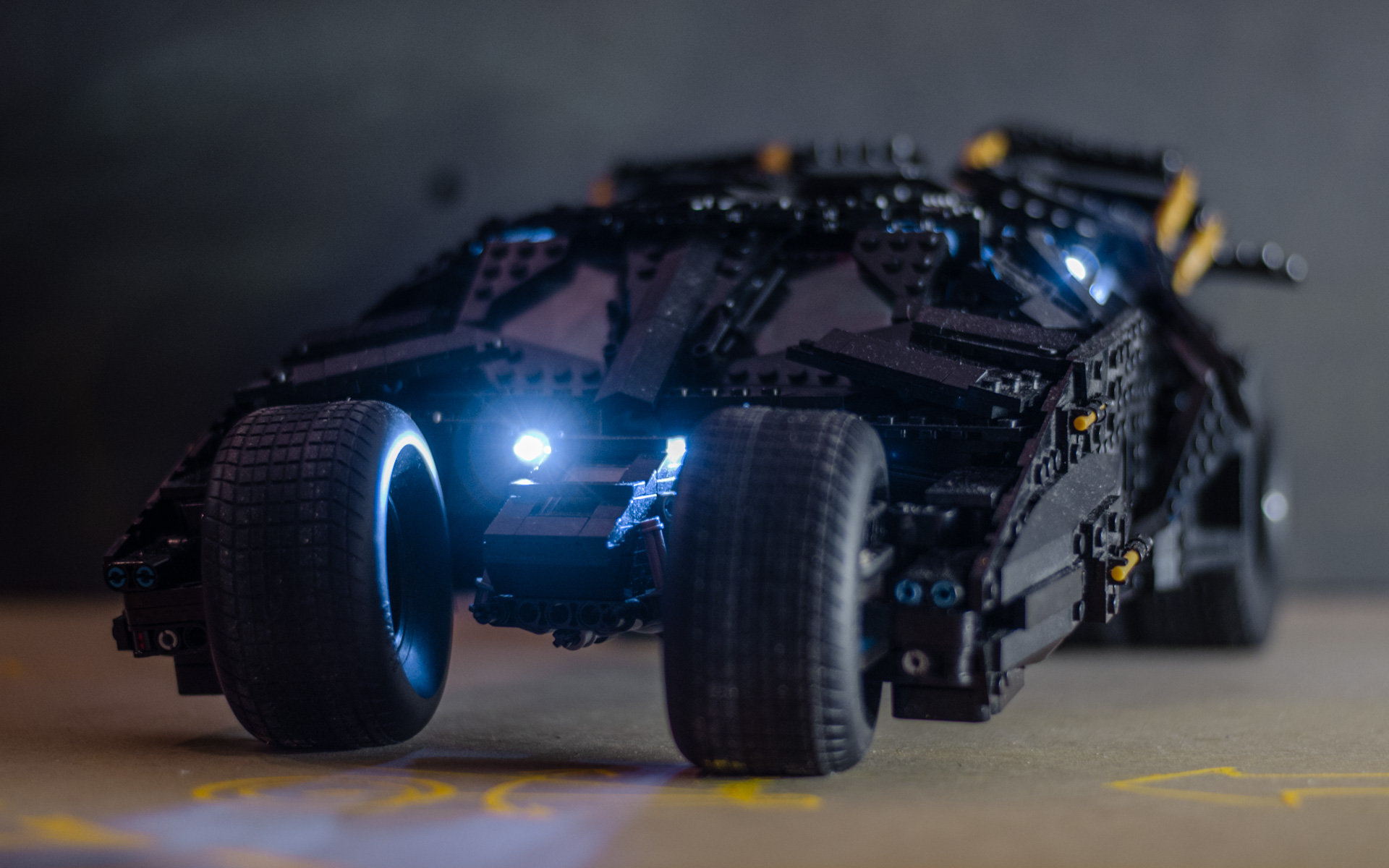 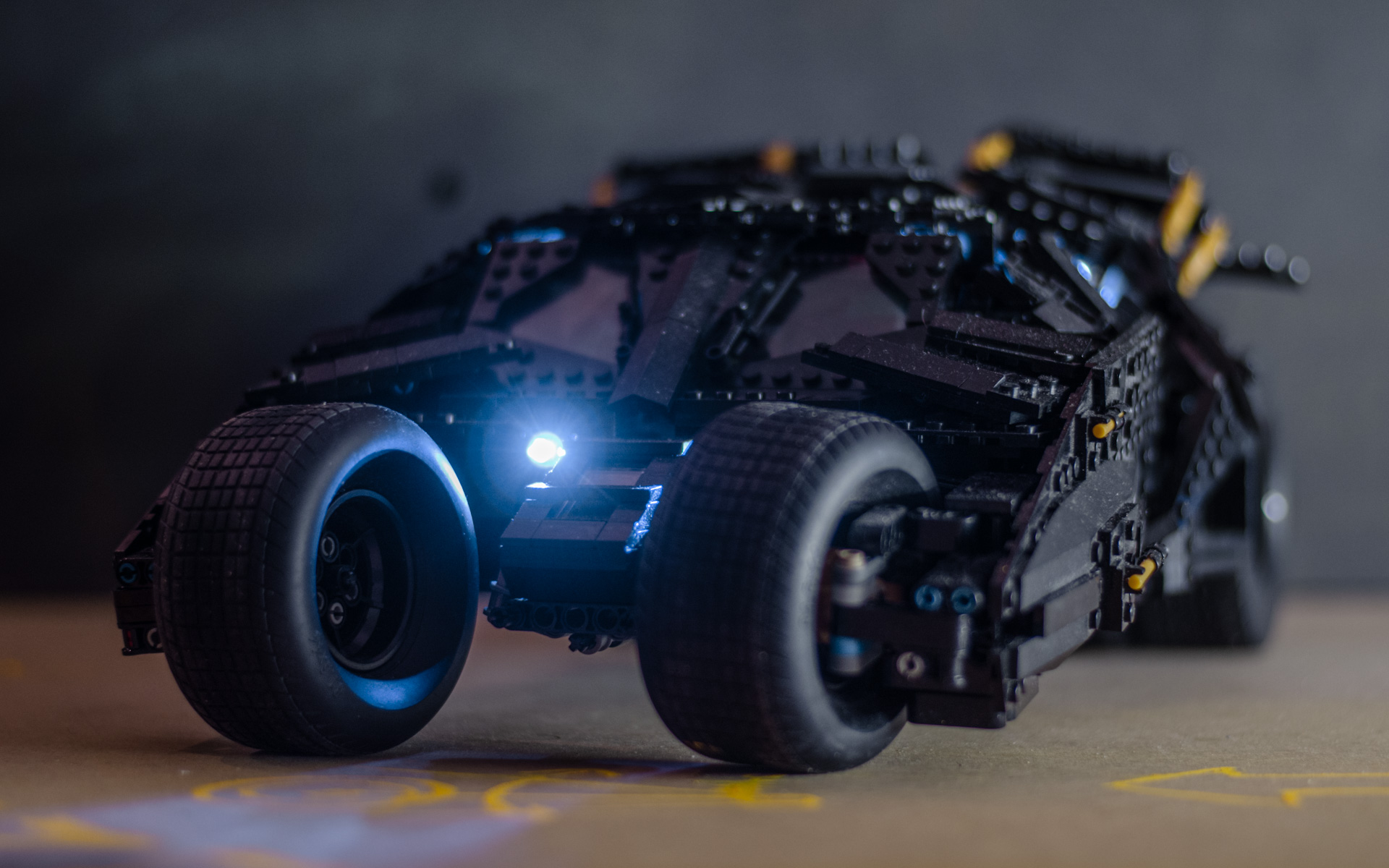 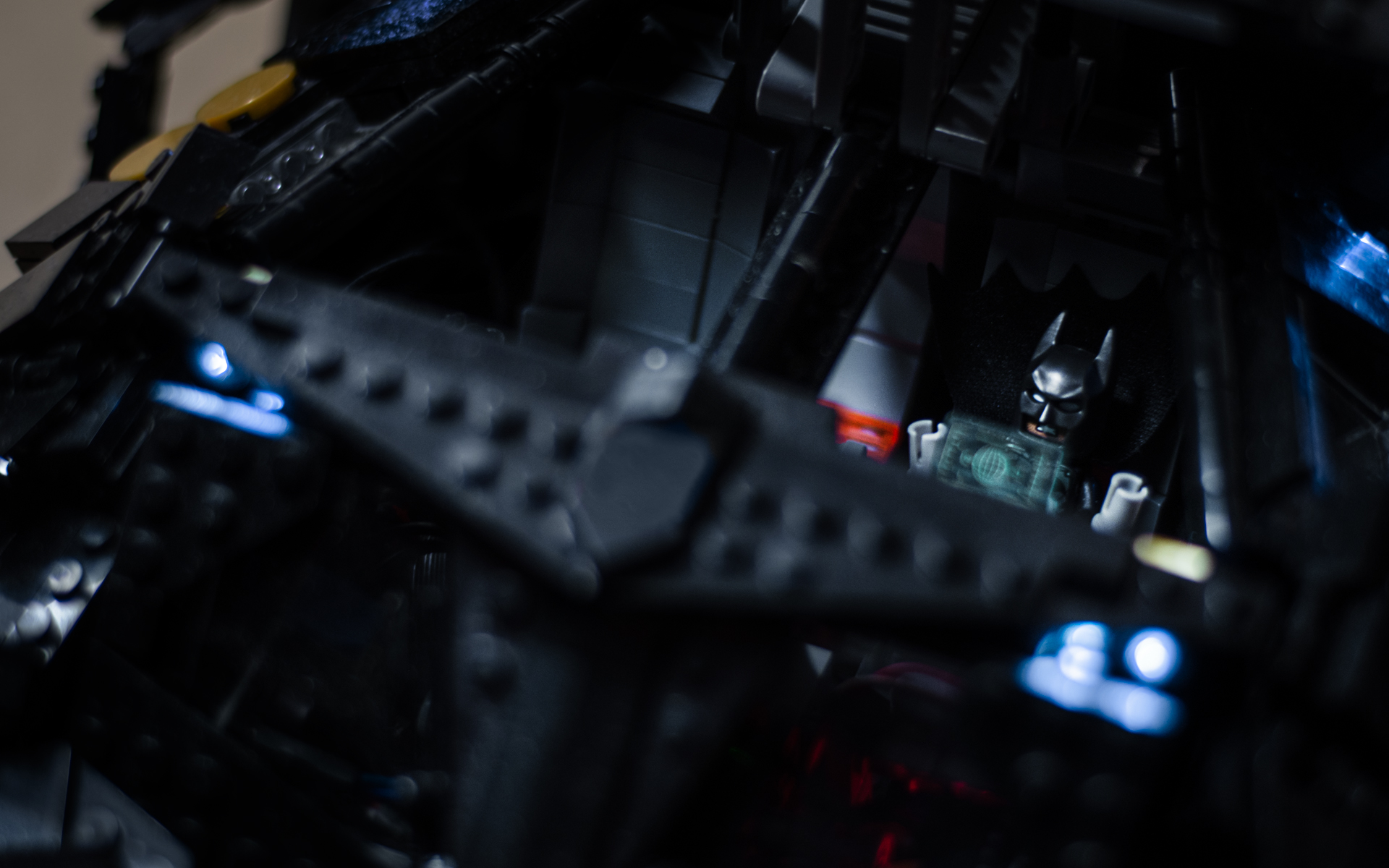 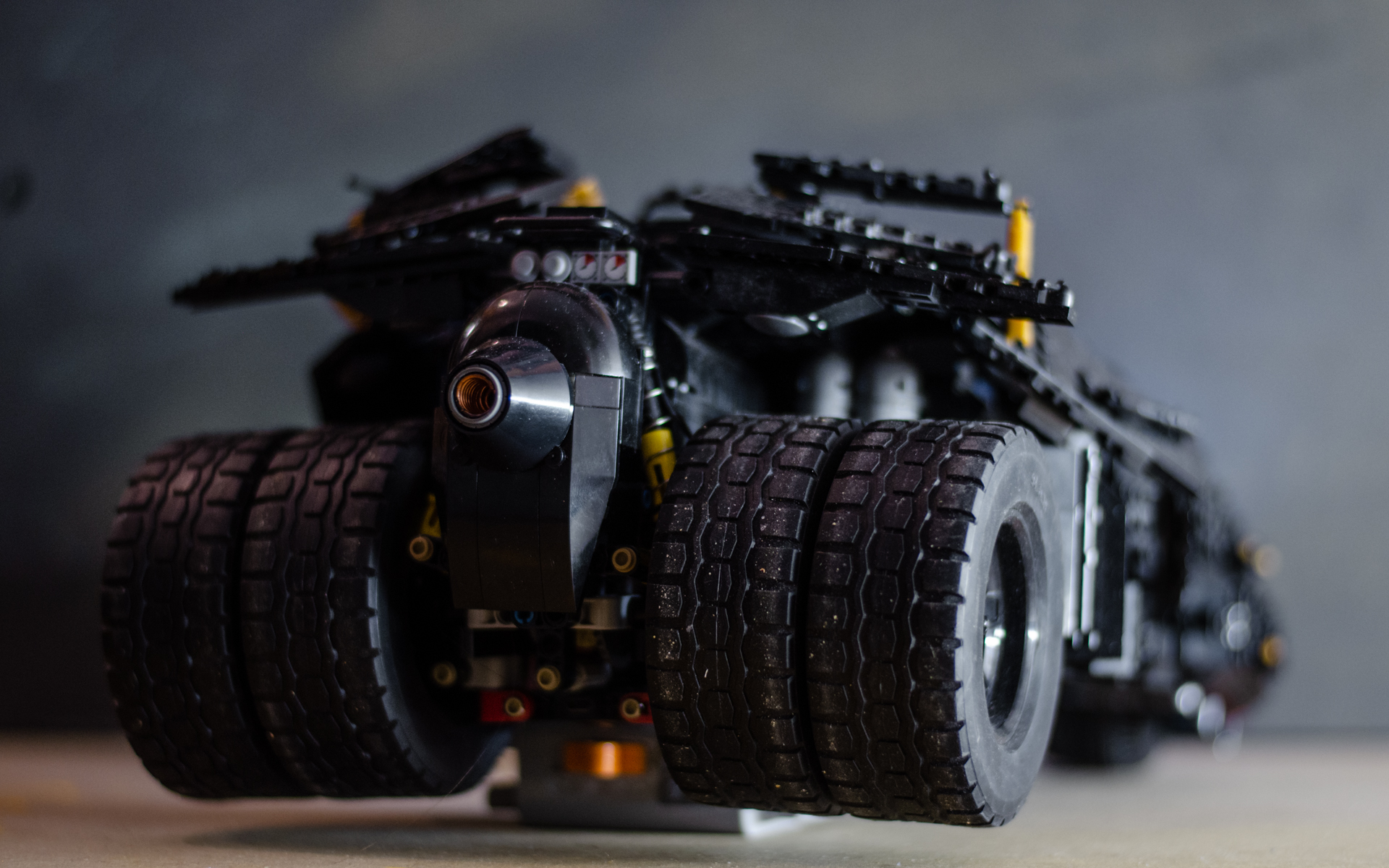 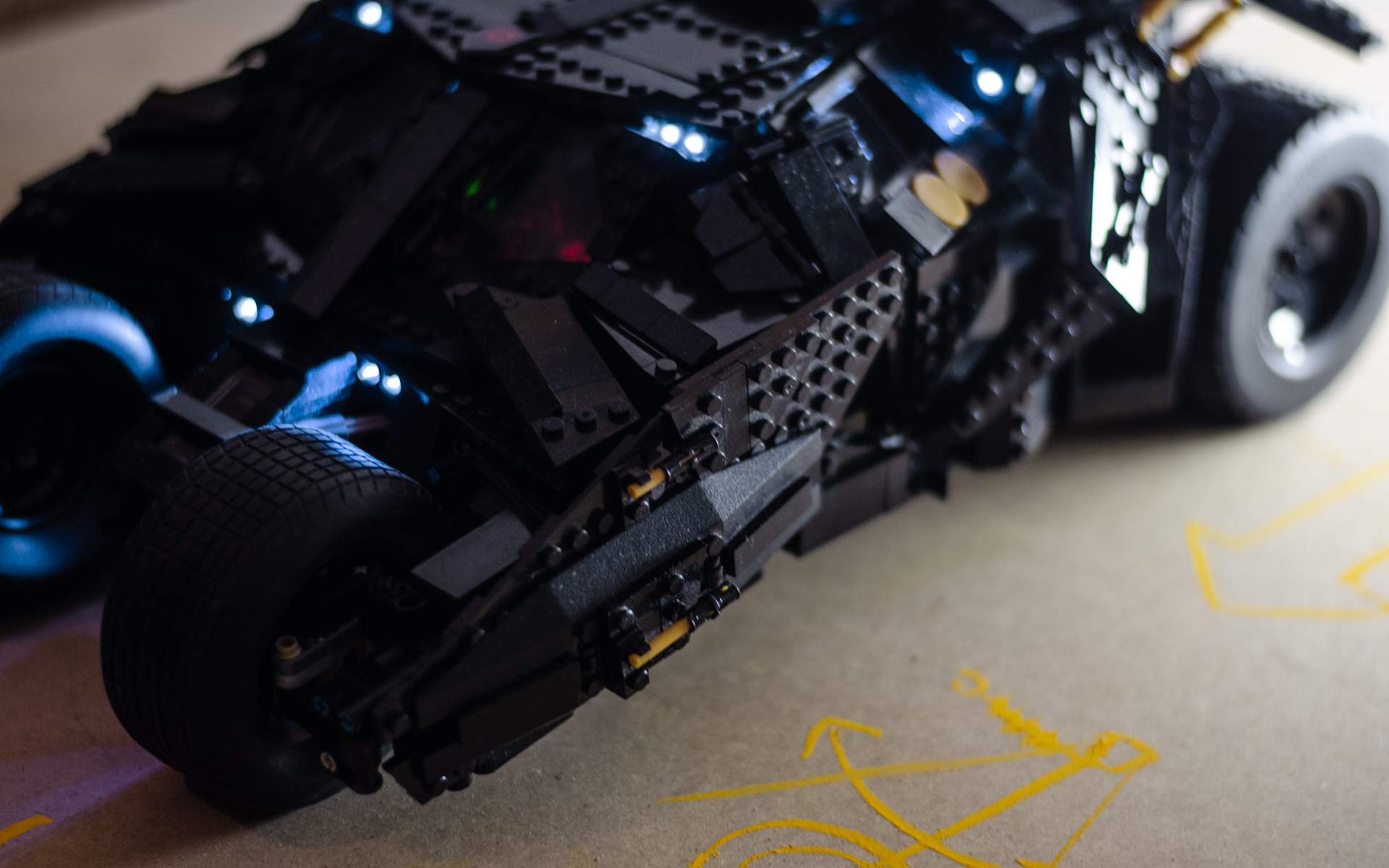 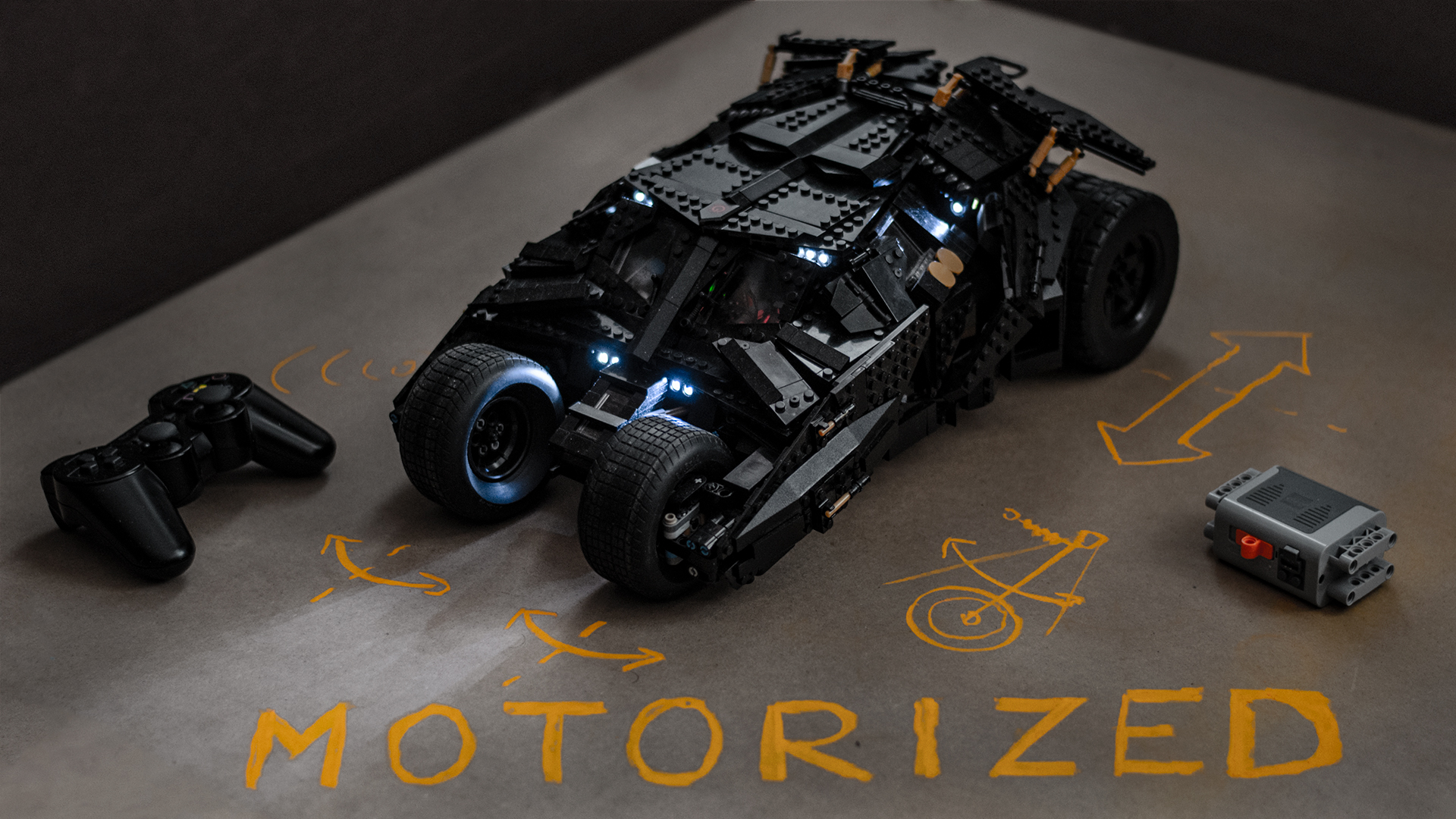 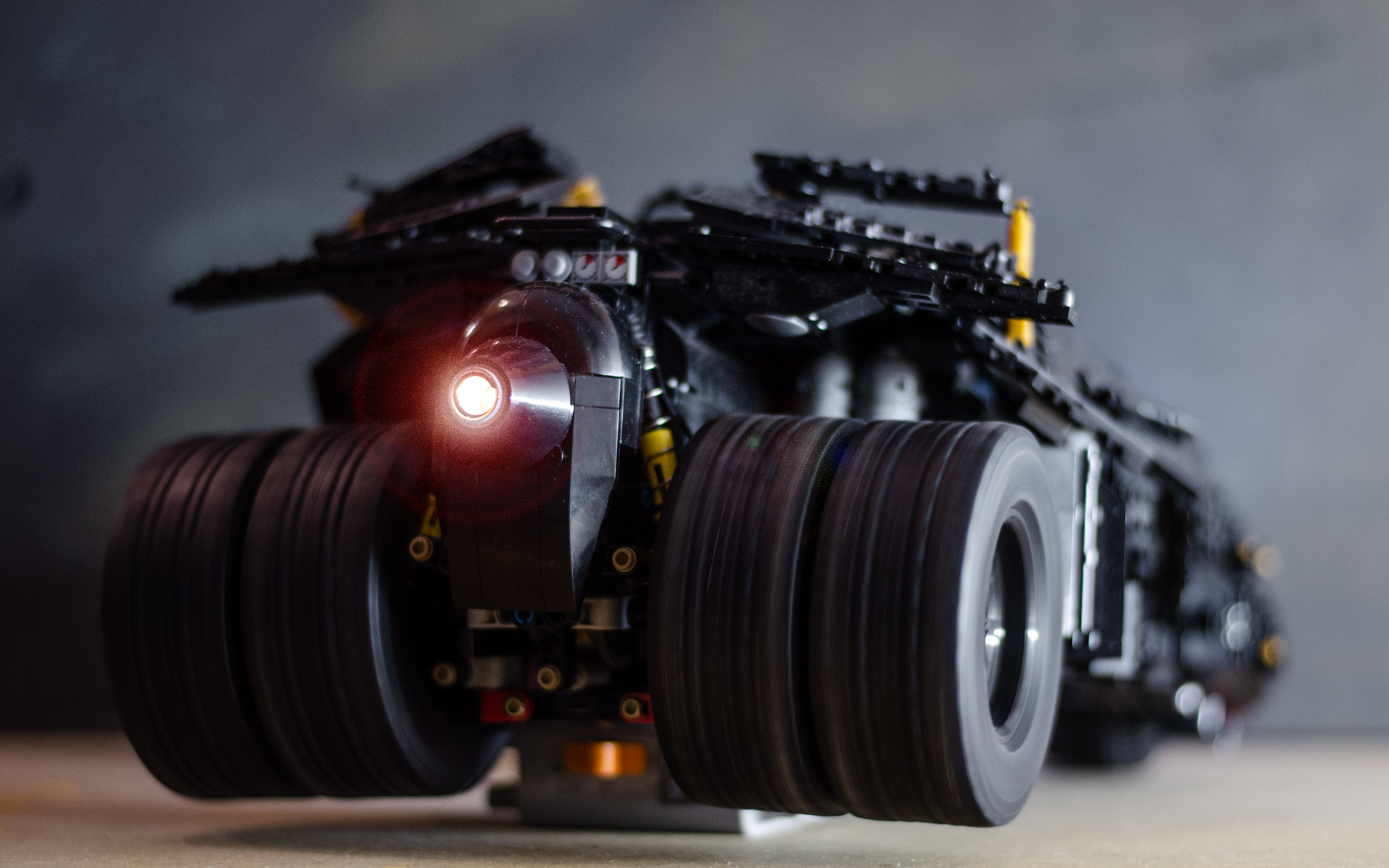 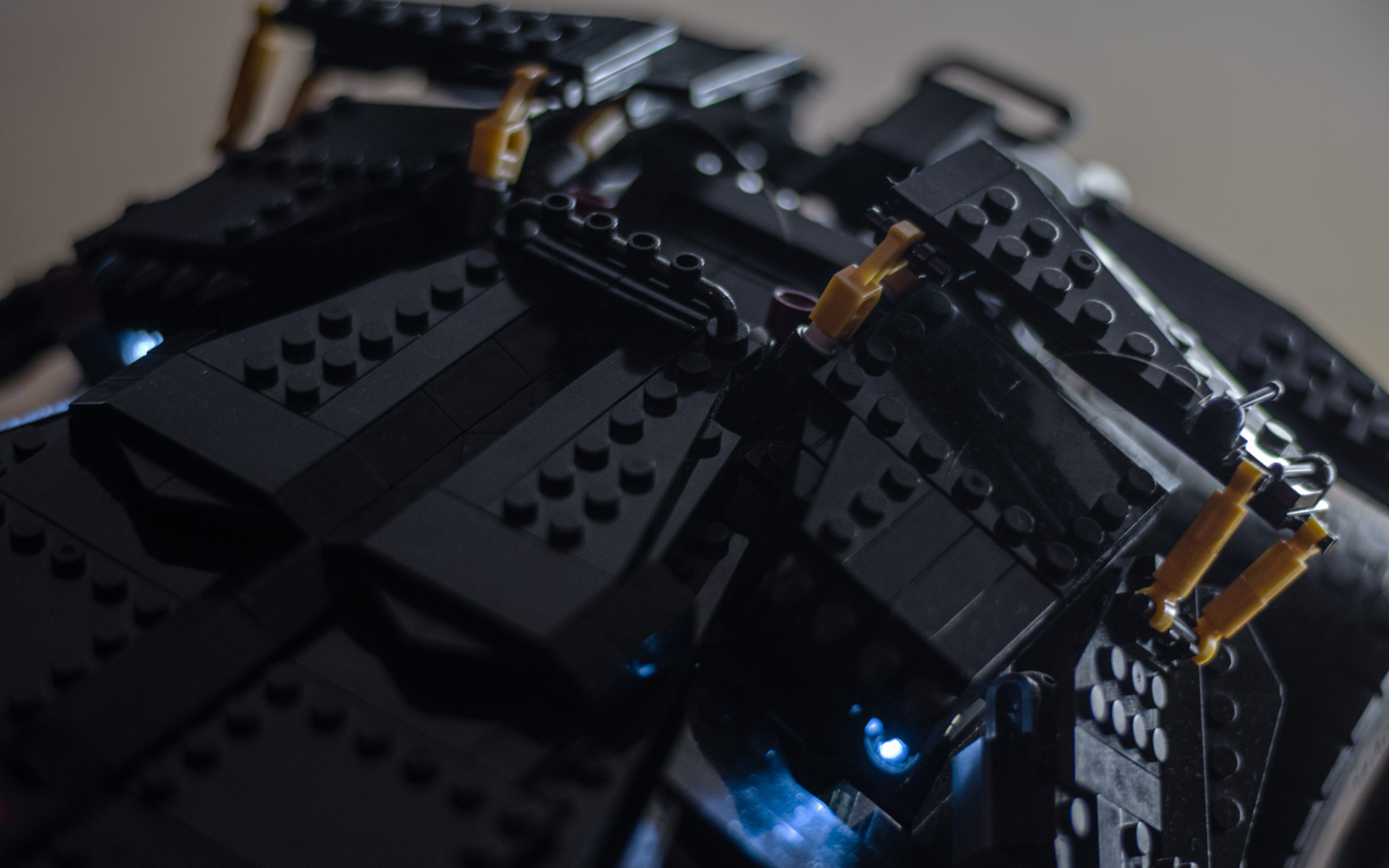 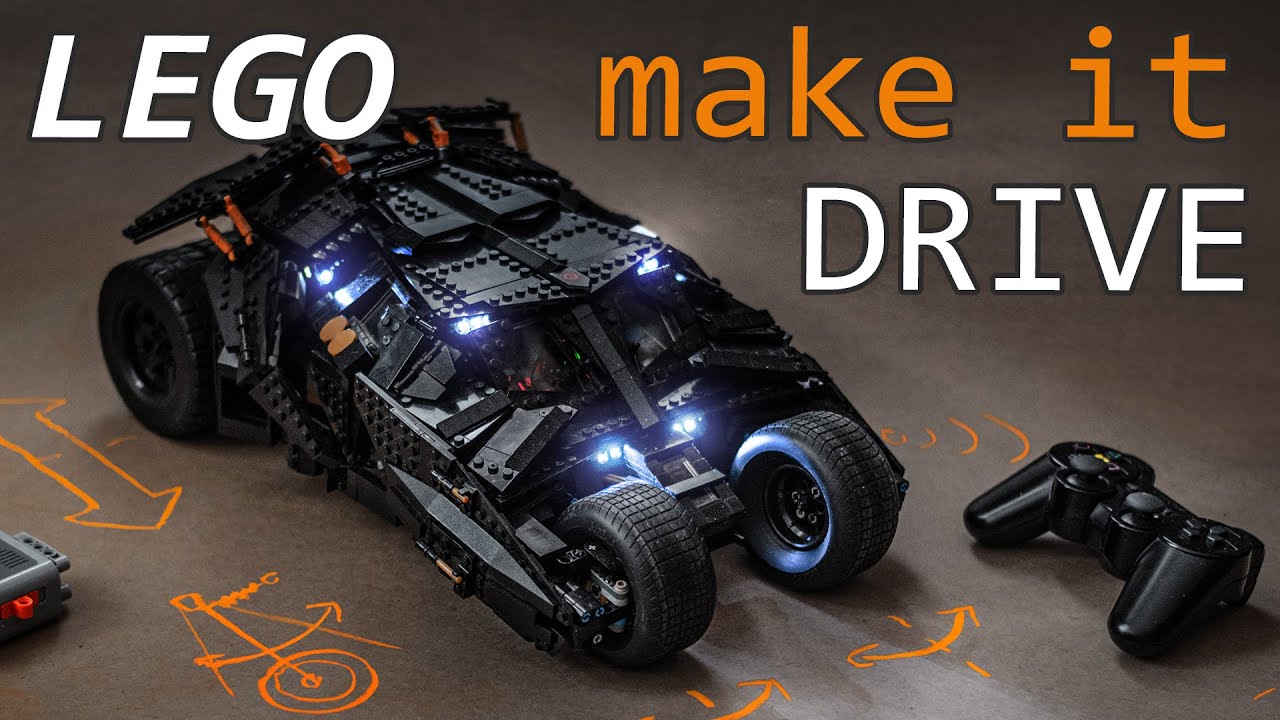 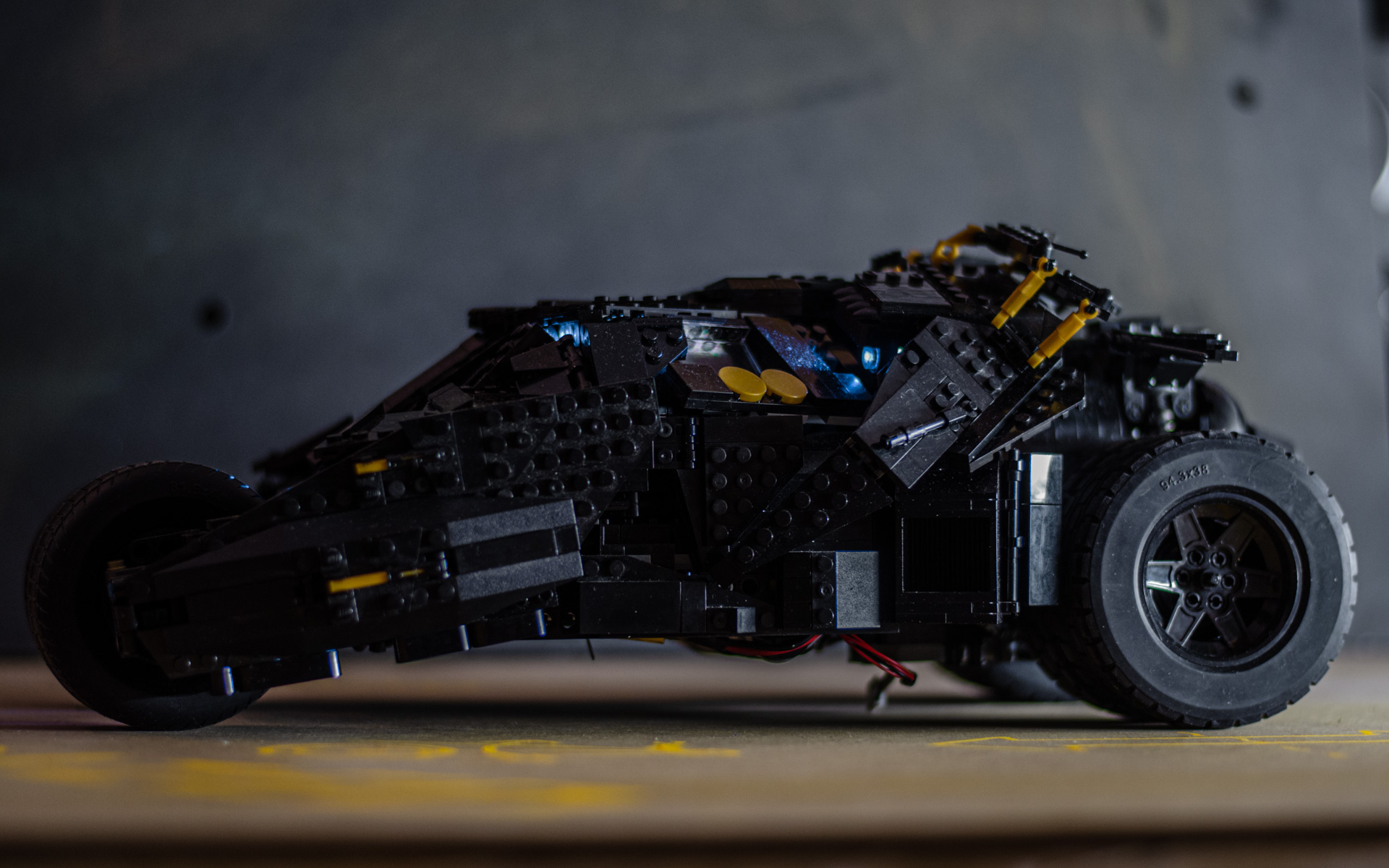 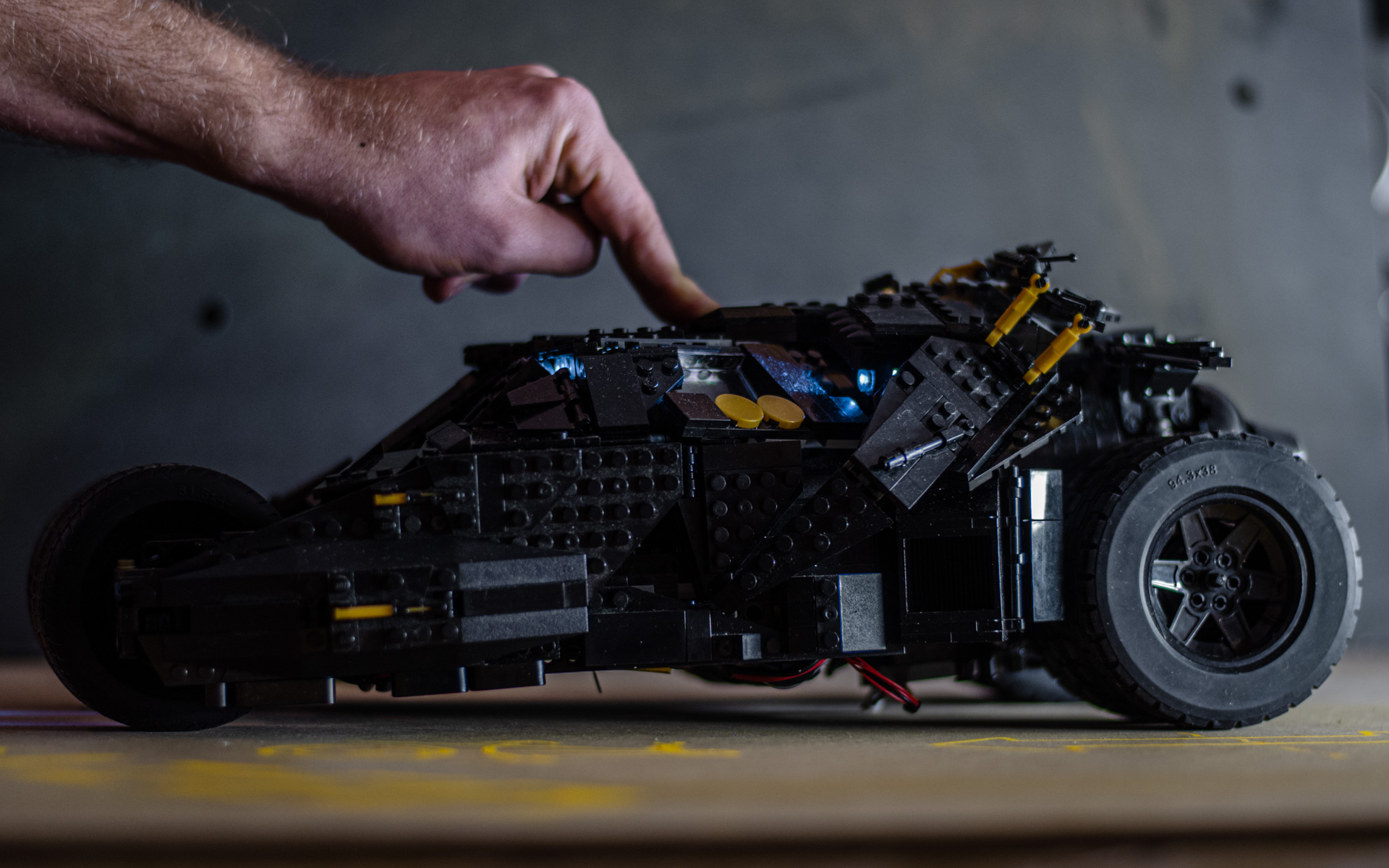 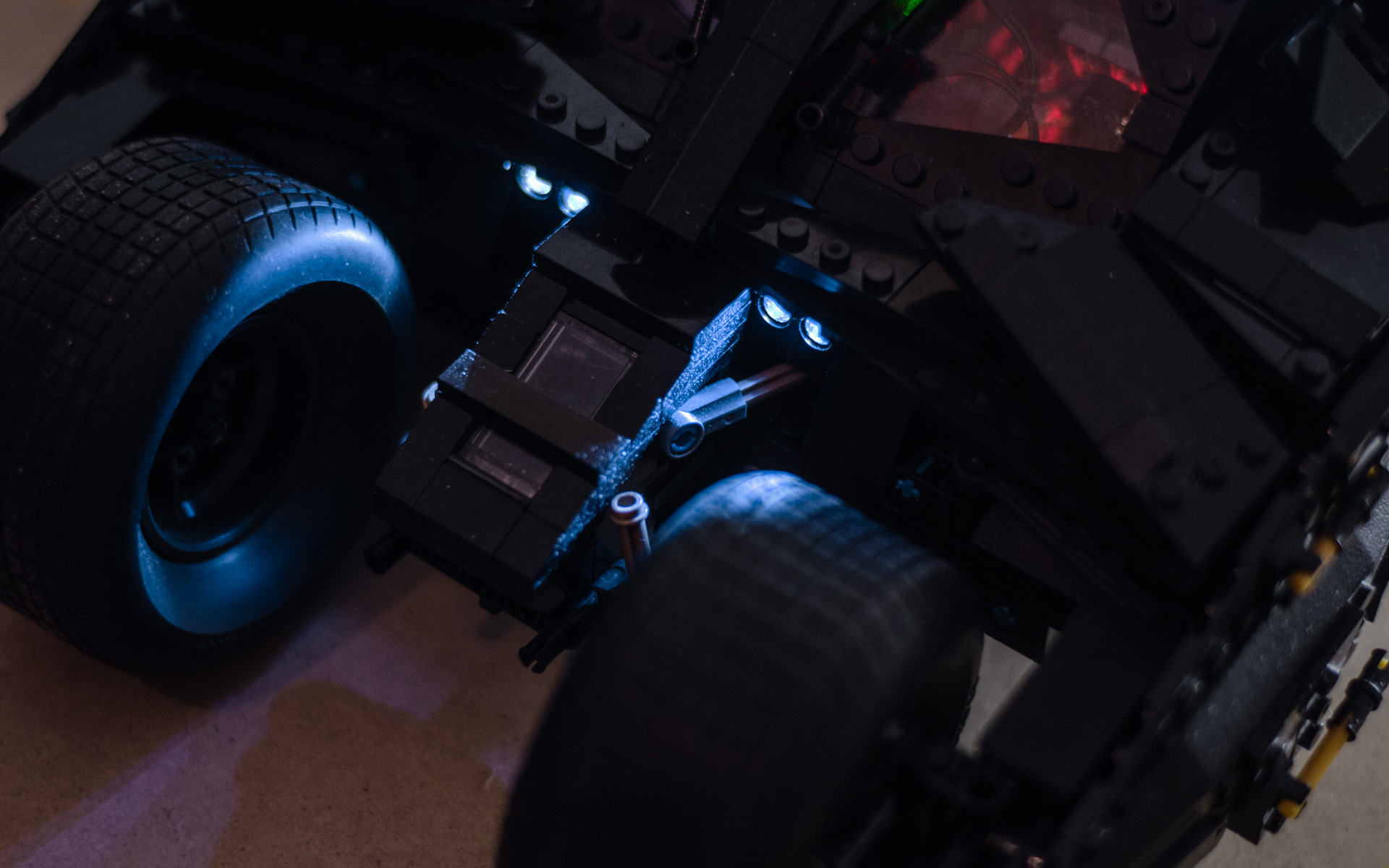 Lego Batman Tumbler motorized gunner Seat
(click to edit) There is some javascript here for the premium elementor media grid to replace videos by looping slomo exerpts!
in PREMIUM MEDIA GRID:
insert image,    set to video    type: youtube    url: youtube url    controls/mute, work on Lightbox, which is cool feature, i recommend controls always true,    delete the lightbox icon in style/lightbox, maybe play wih margin
THE MAGIC - insert into title:     slomoSection( 'youtubeid' , 111 , 222 , 0.5 )     nothing else! 111 is start time, 222 is stoptime, 0.5 is speed, title will be replaced by title from youtube
this will vanish on published page

That's me with my lockdown hair cut or rather not cut ;)))

I always wanted to have the Tumbler, the Batmobile from Christopher Nolan’s The Dark Knight Batman movies and I loved the big Lego 76023 The Tumbler. It is not available from Lego anymore, so I got me a fake copy from China (Ouch! Yes I know. I also prefer Danish quality but I couldn’t afford current collectors prices and the Bricks are pretty good) So instead of traveling myself that year I watched my Tumbler travel by train via Kazakhstan and Russia and Belarus and then why soever to Belgium before returning back east to Germany.

Now that model is huge so I was looking for a motorization but there were only a few show-offs on youtube and no plans available. So I started digging into the current Lego Technic motors which was called Power Functions myself. Now Power Functions uses some simple infrared remote controls – I do not understand why the Lego people always go back to that retro technology from the 1980s. Additionally it is not progarmmable. even worse, the remote provides hard forward-backward and left-right and that’s it. No slow forward, no light control – no way!

Most people who downloaded my building instructions used ofcourse  an S-Brick with a Lego Battery or the Buwizz or even the Power Functions remote. That works, but I wanted something more. I wanted radio controlled, bluetooth at best, and properly programmable, if possible better than that restricting (read frustrating) Lego Mindstorms visual programming. So I found some information about how to connect Power Functions motors to microcontrollers.

I ended up using my favorite ESP32 which is programmable via Arduino but much faster, comes with a dual CPU, more Memory, Bluetooth, Wifi and touch inputs ready and is even cheaper than the usual Arduino boards. 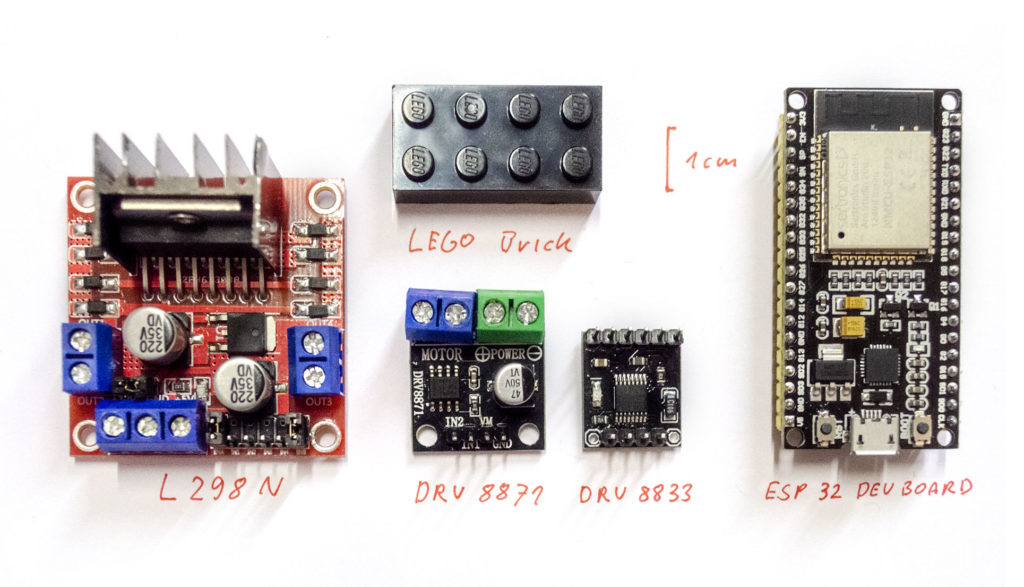 Folks, please stop promoting that steam punk machine called L298N just because everyone else says so and you are too lazy to understand it is totally outdated! It’s not the go to thing at all.

The ESP32 or any Arduino has not enough juice to power Lego motors. You need a so called H-bridge controller for that. The typical statement on the web is “use the good* old* L298N”. So I ordered some and when I got them I was shocked: They were gigantic. So after digging a bit deeper comes out: “old” very much, but “good” not at all!

The L298N is literally from the 1980s and using old fashioned transistors which will drain your precious batteries by heating up – a lot. So basically you will lose 2 Volts and they require big chunky boards with big chunky heat sinks to get rid of all the heat. If you intend to build small or use a battery:

I ended up with a DRV8871 for the motors, a 9V step down power converter with a second  DRV8871 for the servo control, and a DRV8833 (connected to the same step down) as a 4 channel LED control.
A second step down is providing the 5V  power for the ESP32.
Step downs are cheap, small and don’t use much power. The lot of it is smaller than two of those L298N that I would have needed for the motor and servo only.

Now to the Lego. Power Functions comes with 3 motor sizes:  Medium (read small) Large (properly fast) and XL (same as Large but internally geared down for more power). The Tumbler is heavy. About 2.5-3 kg with added motors and batteries. So a large motor would have difficulties to push it over something higher than let’s say a handkerchief and the sluggish XL motor would just not be fun. So what is stronger than a large and faster than an XL? Right, two large motors. Getting those motors run without sliding gears (the typical “creeeeeak” problem) and fine-tuning the two front swing arms that have independent suspension each and even knitting through them some kind of steering mechanism took some weeks of corona lockdown time – yay!

I still love that Lego stuff like a kid. And since nobody else ever made instructions for a RC Lego Tumbler (and now I know why) I made my first Lego building instructions. If you’re interested you can get them at rebrickable. 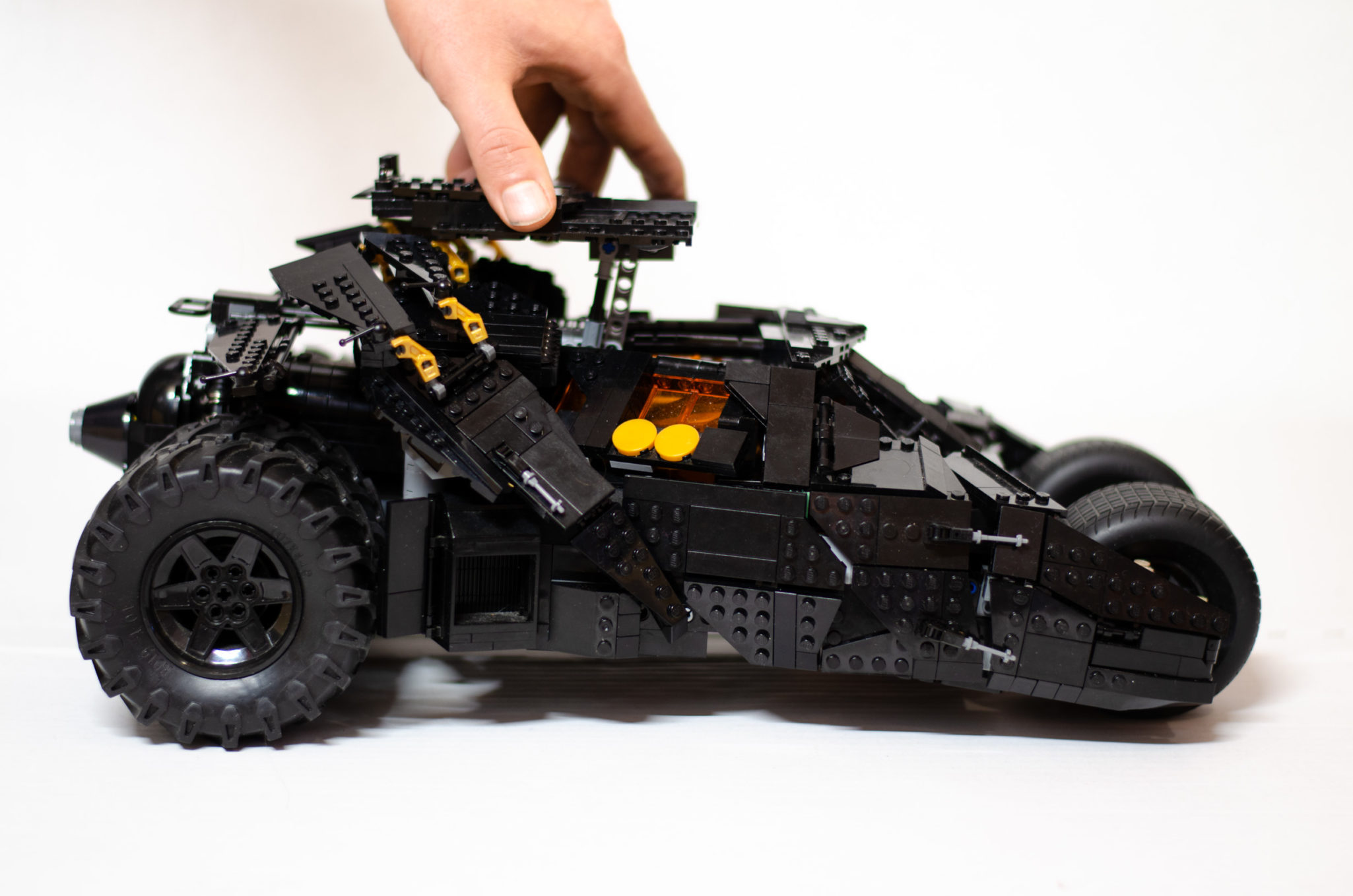 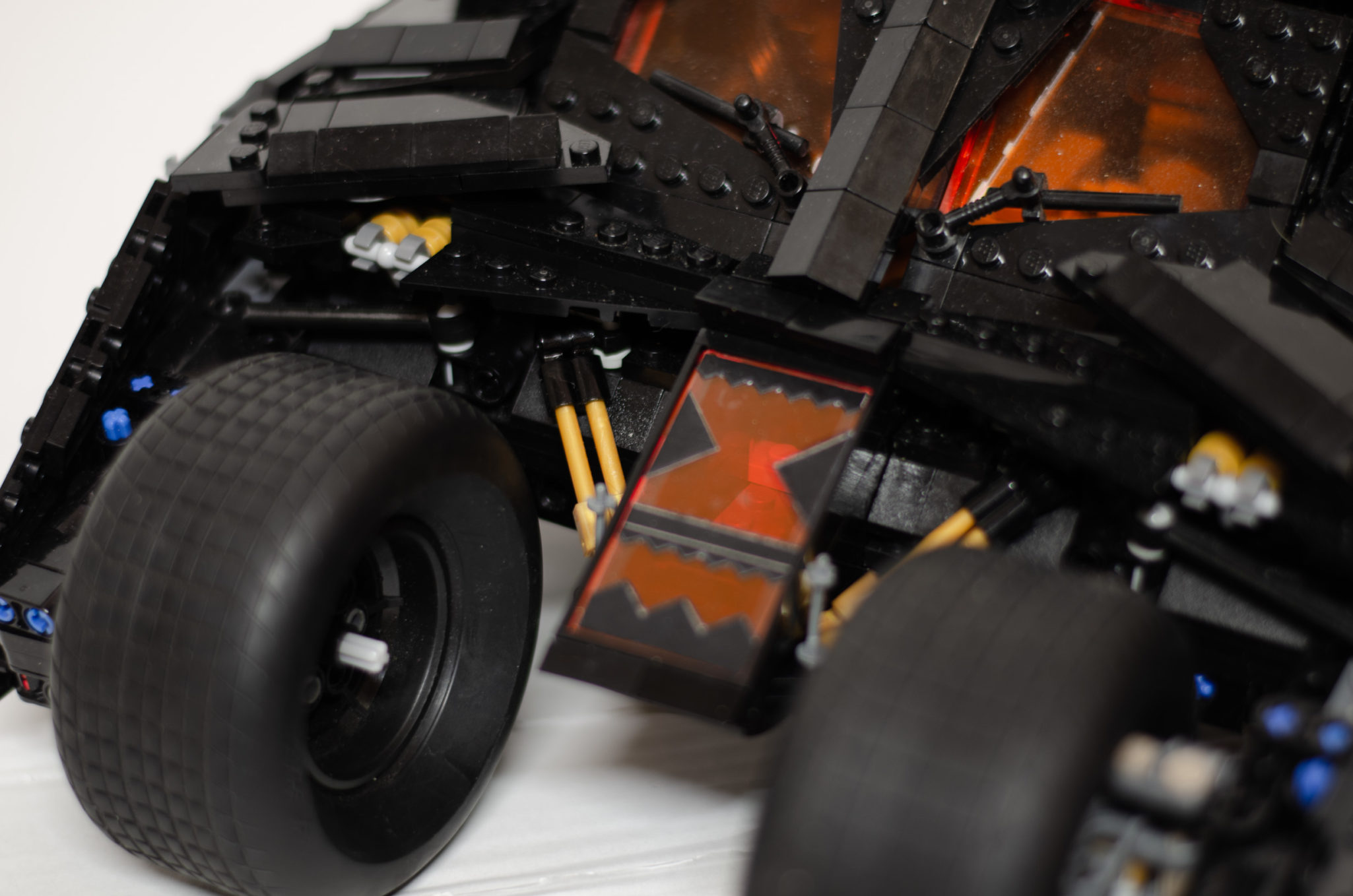 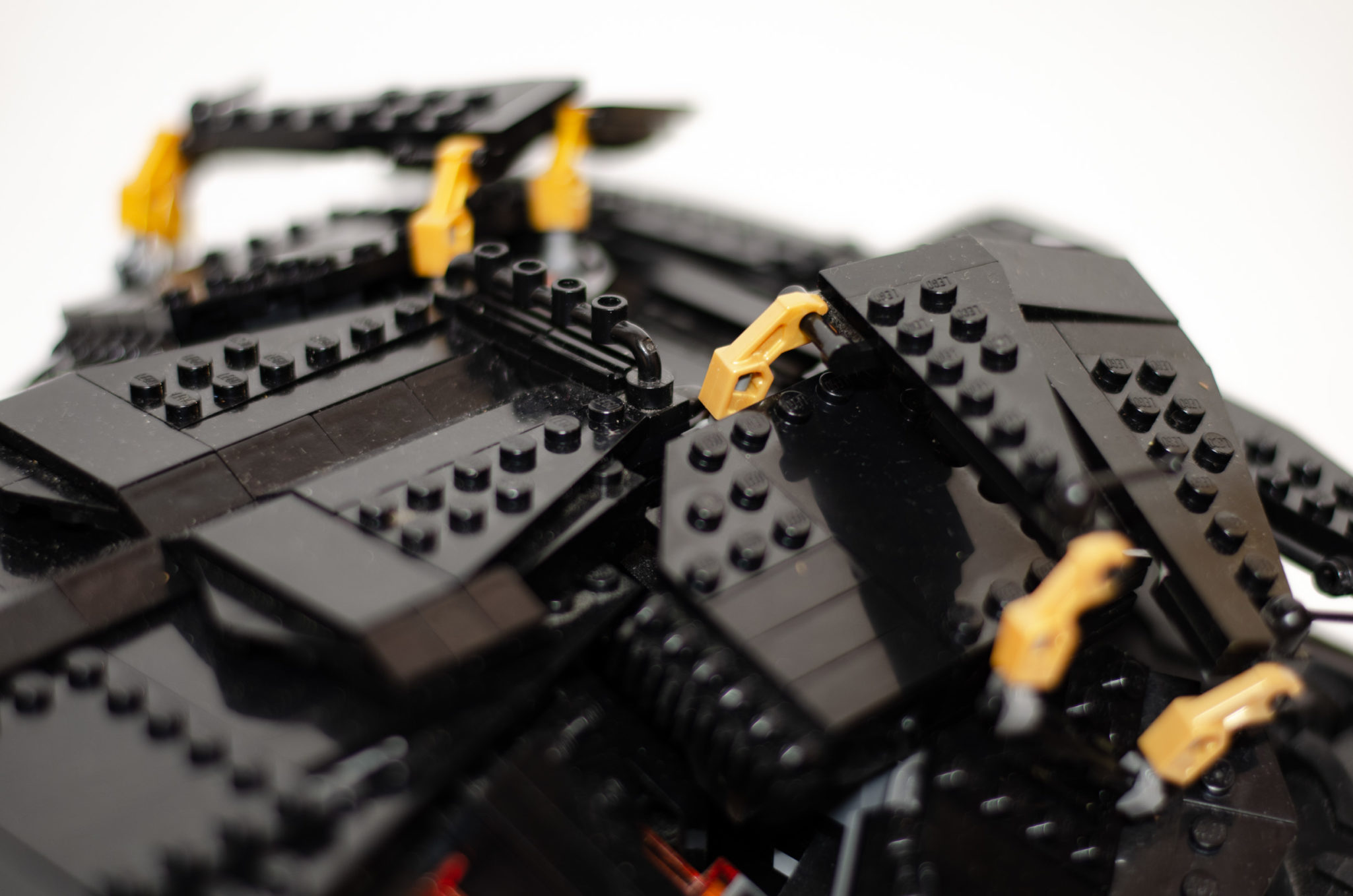 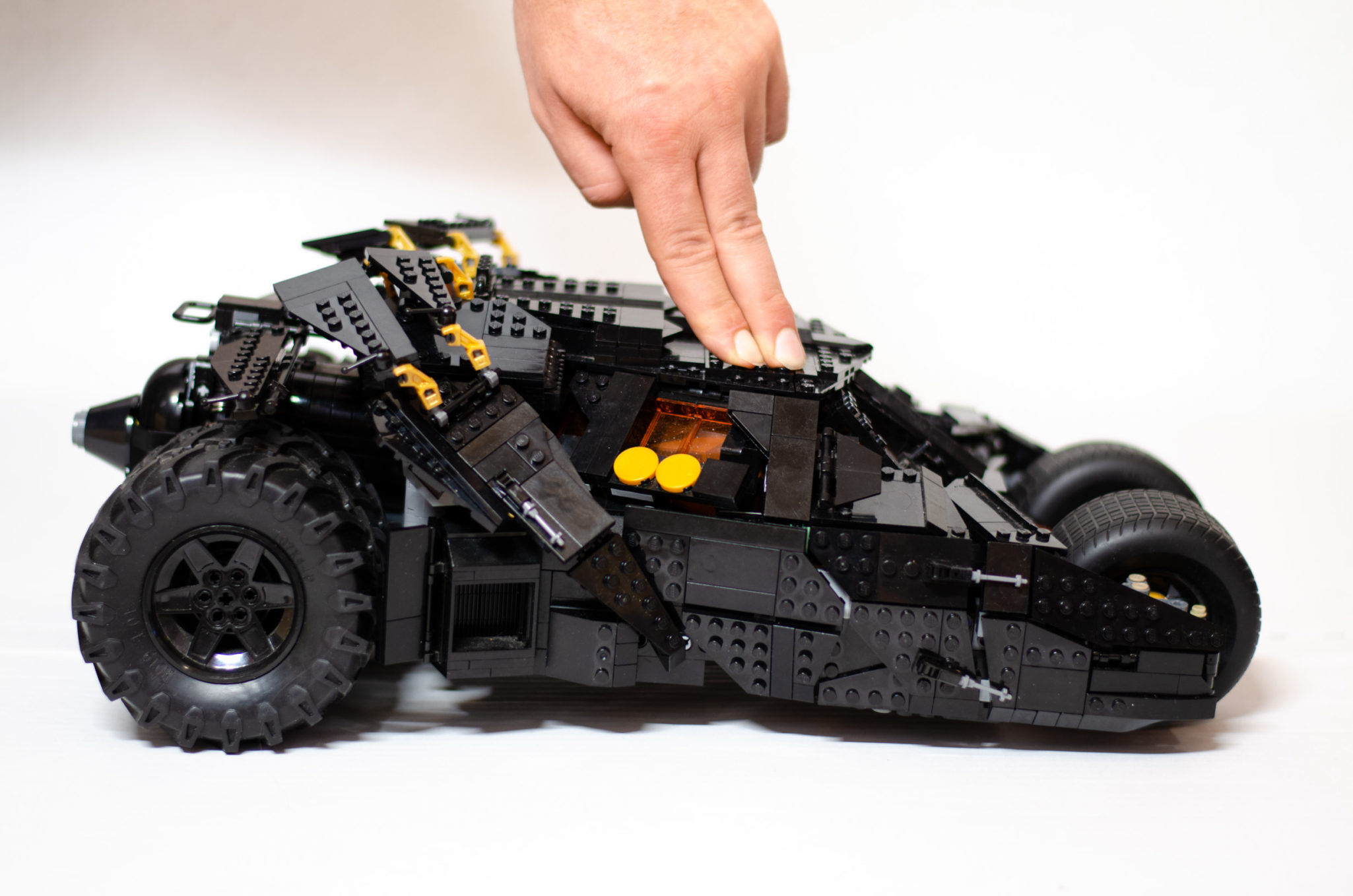 Lego Batman Tumbler motorized - MOC with power functions
(click to edit) There is some javascript here for the premium elementor media grid to replace videos by looping slomo exerpts!
in PREMIUM MEDIA GRID:
insert image,    set to video    type: youtube    url: youtube url    controls/mute, work on Lightbox, which is cool feature, i recommend controls always true,    delete the lightbox icon in style/lightbox, maybe play wih margin
THE MAGIC - insert into title:     slomoSection( 'youtubeid' , 111 , 222 , 0.5 )     nothing else! 111 is start time, 222 is stoptime, 0.5 is speed, title will be replaced by title from youtube
this will vanish on published page